Back
Krishen Khanna was born in Lyallapur, in pre-partition Punjab, moved to Delhi in 1948. Largely a self–taught, he started painting while he was working as a banker, between 1948-1962. A job transfer to Bombay brought him in close proximity with the members of the Progressive Artists Group and the prevalent art movement in Bombay.

Krishen Khanna A Critical Biography by Gayatri Sinha was published (2001) and Sketchbook published (2003) is a faithfully re-produced traveling artist sketchbook with over 140 drawings.

He is a recipient of the Padma Shri by the Government of India (1990) and the Kala Ratna by the All India Fine Arts and Crafts Society (1997). 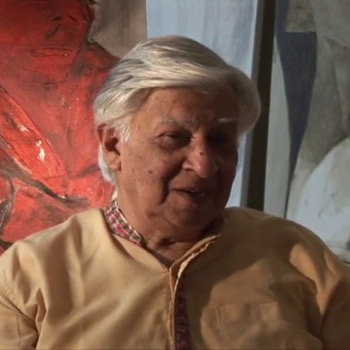