Back
Ravikumar Kashi was born in Bangalore in 1968. He completed his B.F.A. in Painting from College of Fine Arts, Bangalore in 1988. He then did his M.F.A. in Printmaking from Faculty of Fine Arts, M.S. University of Baroda in 1990 and M.A. in English, from Mysore University in 1995. In 2001 he studied handmade papermaking under Ms J. Parry at the Papermaking Resource, Glasgow School of Art, Glasgow, UK, with a grant from the Charles Wallace India Trust. In 2009 he learnt Hanji – traditional Korean paper making from Jang Yong Hoon and Seong Woo at Jang Ji Bang, Korea, with funding from INKO Centre, Chennai.

Since 1991 he has had several solo shows in Bangalore, Mumbai, New Delhi, Chennai, and Hyderabad in India and London & Glasgow in U.K., Palo Alto, California, U.S.A., and Shanghai, China.

He has won Karnataka Lalit Kala Akademi award three times and National Award in 2001. He also writes on art in Kannada and English in various magazines and newspapers.

Ravi lives and works in Banglore. 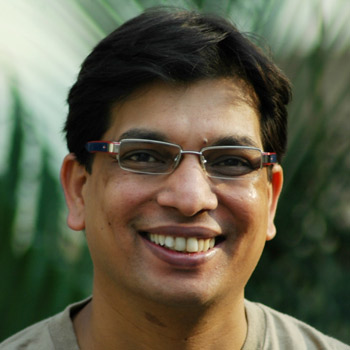