Back
Born in Kolkota in 1935, Sakti Burman studied painting at the Government college of Arts and Crafts, Kolkata and later the Ecole Nationale des Beaux Arts, Paris.

Since 1954, he has held several one-man exhibitions in India and abroad including a major showing most recently Sakti Burman - Now and Then, UNESCO, Paris, 2008.

Along with painting in oils and watercolour Sakti Burman has produced several graphics including an album of sixteen limited edition lithographs illustrating Rabindranath Tagore's Gitanjali. After dabling with wood carving in the early 1970's the artist produced and exhibited a substantial body of bronze sculpture in 2009.

In 1975 Sakti Burman, a monograph was published by Imprimerie de Blayac, France and Sakti Burman - Dreamers on the Arc by Manasij Majumder published by Pundole Art Gallery, 2000; besides several inclusions in other prestegious publications. 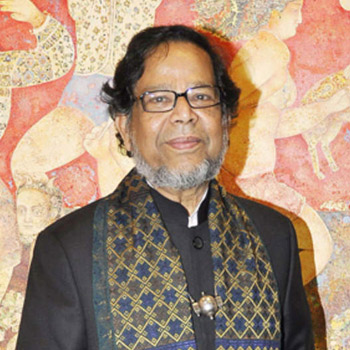